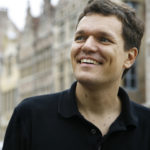 René Mogensen (PhD, MM, MA, BA) currently works on human-computer co-creativity and computational creativity in music, through various approaches in analytical research and by programming original interactive generative computer music systems for concert productions. His recent *SomSwarm* improviser system, which uses a hybrid technology of Self-Organising Maps and Swarm algorithms, has been documented in concert performances in the UK and at international academic conferences. In this research area he is currently developing a new computer improviser project with a collaborator which will be based at Goldsmiths in London. René has worked with live interactive computer music systems in various roles as a composer, musician, producer, and technician during the last three decades. His numerous original music works for ensembles and soloists (with and without computers) have been performed by various soloists and ensembles around Europe, the USA and Asia. As a saxophonist and/or computer musician he has also been active in many concerts and recordings. His research in music, computer music, and artificial intelligence in music has recently been published in books by Springer, Vernon, Editions Delatour, as academic journal articles, as well as in international conference proceedings (CSMC, AISB, EuroMAC, etc.). He is the recipient of grants from the Danish Arts Foundation, Meet the Composer USA, John Anson Kittredge Fund, Yvar Mikhashoff Trust for New Music, and other funders. René is originally from Denmark and his degrees are: PhD on analysis of interactive music, defended at Birmingham City University, UK; MM in Electronic Music, Academy of Music, Aarhus, Denmark; MA in Contemporary Music, New York University, USA; and BA, University of Rochester, NY, USA. He currently teaches undergraduates and postgraduates in areas of creative music technology and composition at the Royal Birmingham Conservatoire in the UK.