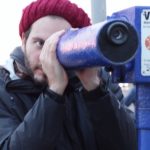 Born in Athens, Greece. Initially studied Economics (B.Sc, 1996-2000) and Statistics (M.Sc., 2000-2003) in Athens by accident, Music and Music Technology (B.Arts, 2003-2006) in Cambridge and completed a PhD in Composition (2010) at the Sonic Arts Research Centre in Northern Ireland. I’m mostly interested in electroacoustic composition, especially real-time computer music involving acoustic instruments and multi-speaker systems; though I’m also quite happy with various expressions of “popular” music. I’ve written music for instrumental ensembles, fixed & mixed media, live electronics, the network, for film and theatre. My works have been performed throughout Europe, in the US and Latin America and some have received awards and distinctions at international competitions. In the past I’ve been lucky to receive the McLeod Prize from Anglia Ruskin University and my PhD research to be funded by the Department for Employment & Learning. Until 2010 I was a teaching assistant at Queen’s University; I lectured for a year at the Technological Institute of Crete (2011) before joining Bournemouth University as a lecturer in Music & Audio Technology (2012-2014). Since 2017 I have taught at the Ionian University of Corfu and the University of Athens.